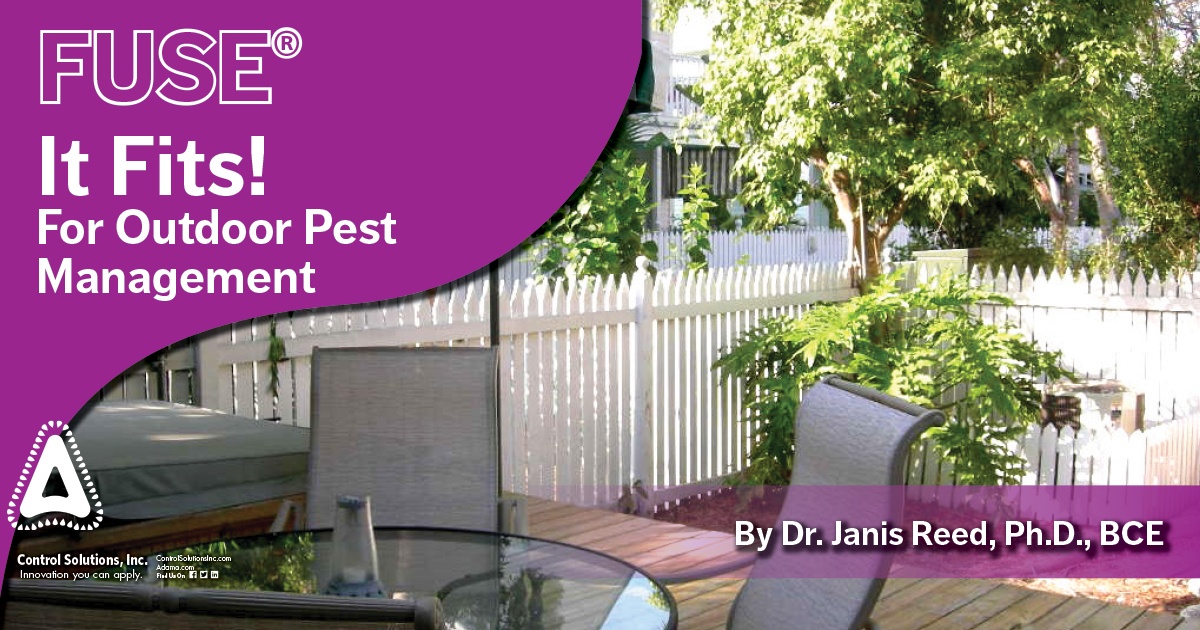 It's Not Just For Ants & Termites

Fuse® SC is one of the first of the Combination Chemistry® products launched by CSI. Fuse® fits for outdoor pest management of structure infesting ants, occasional invaders, termites and other pests.

Fuse® is a brand new concept in liquid insecticides, combining the power of 2 non-repellent active ingredients, imidacloprid and fipronil, into one powerful tool for PMPs.

Add an IGR for 3 modes of action

Fuse® SC is highly effective against ants and termites; but many PMPs are not aware of Fuse®’s ability to control occasional invaders, such as earwigs, springtails, crickets, Asian lady beetles, brown marmorated stink bugs, and boxelder beetles. Fuse® SC can be applied to all the areas these insects utilize to enter structures as well the exterior perimeter, making Fuse® a versatile, year-round perimeter product. The non-repellent nature of the active ingredients allow an application into areas where the insects are harboraging without causing them to be repelled and move further into the structure.

Also, dual active ingredients reduce the chances for populations to develop resistance to commonly used pyrethroids due to different modes of action from both the pyrethroids and each other. If the PMP decides to add a insect growth regulator, such as Tekko Pro, to the tank mix, a third mode of action is present, reducing the probability of resistance occurring even further.

With an innovative perimeter pest application chart featuring your choice of rate and your choice of spray swath, you can customize your exterior perimeter pest management strategy the way you want. Whatever your perimeter pest management application schedule may look like, Fuse Fits™. This flexible exterior application choice allows the PMP to decide how often and at what rate they apply Fuse® SC. With rates as low as 1/3 of an ounce per 1000 square feet of treated surface, PMPs can keep costs low and still provide effective and long-lasting pest control.

Fuse® is labeled to use on exterior surfaces. The label allows an applicator to apply a spray swath of up to 18 inches in width around doors, windows, vents, pipes, foundation cracks, drilled holes or around any exterior opening where listed pests could enter the structure. This application can be made as a general surface spray, crack and crevice, or void application. Due to recent pyrethroid restrictions that limit applications of these product to impervious surfaces around the perimeter of structures, PMPs are left with few options; Fuse® SC can be applied in many of these areas* without concern for these limitations.

*in the 2X2 spray swath application, treatments cannot be applied to impervious surfaces. Refer to the Fuse® SClabel for further information.