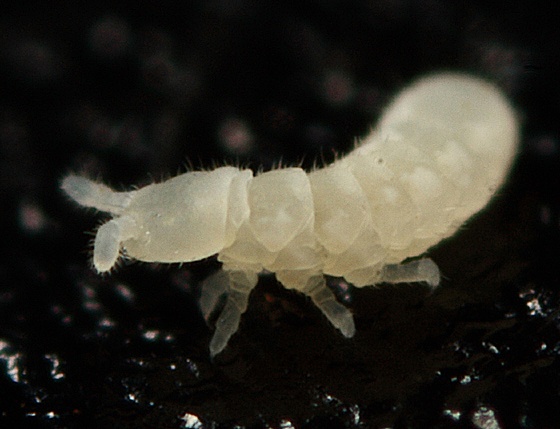 These are most likely springtails, or tiny insects in the order Collembola. Generally, springtails are less than ¼” or 6 mm long and can range in color from white, brown, grey, to a bluish purple. Some are even iridescent in color. These insects do not bite and in fact, their mouthparts are contained inside their head capsule.

All springtails can “jump,” but this jumping ability is not by using their legs – but rather a spring-loaded mechanism called a furcula. This mechanism locks into a notch on the underside of their bodies, much like an old-fashioned mouse trap, and if disturbed or for any other reason, the spring is released and the insect can “jump” several inches.

Springtails feed on decomposing organic matter, including plant and animal material and are plentiful in soil.

Over 100,000 individual springtails in a single square meter of soil

They are known to prefer dark, damp habitats and are extremely common in the environment. Some estimates have shown >100,000 individual springtails in a single square meter of soil.

These insects can become abundant indoors in damp places such as bathrooms, kitchens, and basements, with numbers in the thousands. Occasionally, springtails will build up impressive numbers in the soil or growing medium of indoor plants.

Pesticide application can be helpful in control, but for long term control, moisture and humidity reduction are generally the most effective control measures.